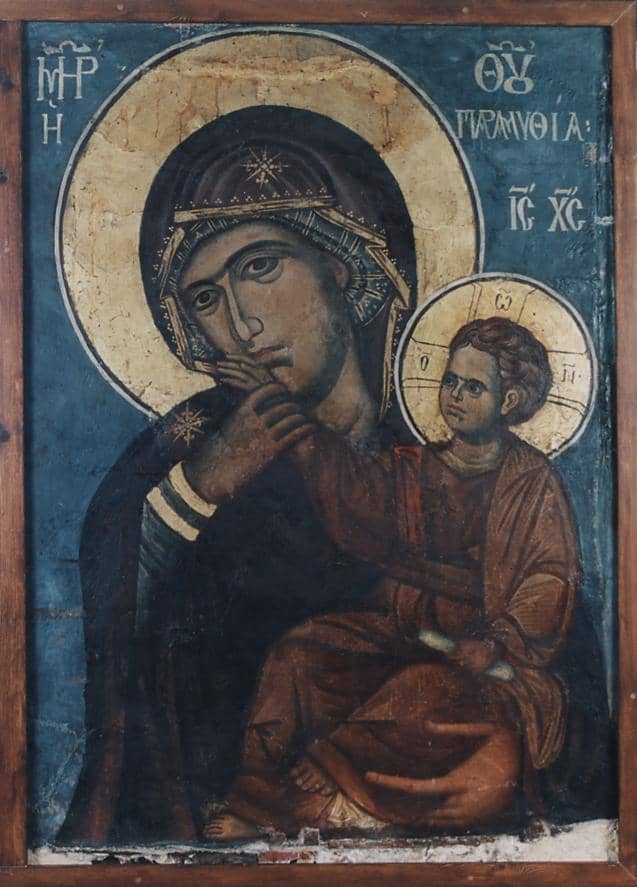 Pirates had secretly landed on the shore of the monastery and were hiding, waiting for the gates to open in the morning in order to launch an attack on the monastery of Vatopedi. The Abbot, who had remained behind after the end of Matins in order to continue his prayer, heard these words from the icon of the Blessed Virgin:

“Do not open the gates of the Monastery today, but go up on the walls and drive away the pirates.”

As he turned to look, he saw the Theotokos turned towards her right shoulder and looking at him, while the Holy child was stretching out His hand to cover the mouth of His mother saying,

“No, Mother, do not watch over this sinful flock, let them fall under the swore of the pirates and be punished as they deserve.”

But the Blessed Virgin, taking Her Son’s hand in Hers and turning Her head a little to free her mouth, repeating the same words.

This last arrangement of the figures has remained permanently on the icon and has, thus, and has also earned it the rare iconographer’s title of “Achaeropito”. The monks, miraculously saved from the pirates, gave thanks to the Theotokos and named the icon “Paramythia”, which means “calming down” or “restrain,” words which equally convey the content of the miracle.

The icon is a wall-painting and is on the right choir of the chapel named after it. In memory of this miraculous event a perpetual lamp burns in front of the wonderworking icon. Every day a Canon of Supplication is chanted in honour of the icon and on Fridays the Divine Liturgy is celebrated.